I wrote a book. It’s about a world made entirely of clones. Here’s how I came up with that idea and fleshed it out into a trilogy.

I became interested in writing a book several months ago. I knew I wanted to write a dystopian YA science fiction trilogy, since that’s the exact genre and series length I am drawn to again and again. I love most of the ones I read, and when I don’t love them, I tend to still read them all the way through.

Before I started writing, I read. A lot. Not dystopian science fiction – I read some of that, and was totally inspired and better understood the genre – but I also read a ton of articles about how to write a novel. I never considered myself a writer, but suddenly, it was all I wanted to do. Sadly, I’m known in my family as someone who is fantastic at starting cool projects. Emphasis on “starting.” I am not known for completion. So I didn’t want to just write a book. I wanted to Finish. Three. Books.

The only problem was that I had no idea what that trilogy would be about. I knew I wanted to have a Bad-Ass Female Main Character, and I knew the tropes I wanted to hit. I read about story beats and structure. But I still didn’t have my Big Idea.

Great news! I read a blog article (I’ll find it and link to it here, I promise) that recommended looking for inspiration in the Reuters Oddly Enough section. The idea is to read about some weird stuff that’s going on, find something that piques your interest, and ask yourself a lot of What If? questions. 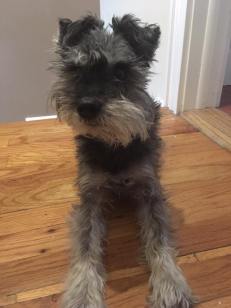 Well, I read through a lot of (awesomely) weird headlines and finally found one that appealed to me. Barbra Streisand cloned her dog. That appealed to me first, because I have a dog who I love dearly and firmly believe will live forever. (Don’t comment on that, thank you.) I can understand why someone would want to keep their dog alive forever, especially if they’re not, like my dog, immortal. (Again, can’t stress this enough – no comments on this fact please.) Second, the science of cloning intrigues me. If I’m cloned, who is that person? Is it me? How similar would we be, given nature vs. nurture? I started asking these questions and came to the one that would be the spring board for my whole trilogy: What if the world was made entirely of clones?

This What If cascaded into a hundred other questions.

All of these questions led to the Clone Crisis trilogy. I had a theme in mind (How do people respond when they find out they don’t have free will?), some characters I was growing more and more attached to, and the basics of a plot. Don’t get me started on books 2 and 3 – remember, I am a starter, not a finisher. Plotting too much could jinx me.

The book still had problems. Luckily, I found an amazing tool to help me write better.

I went out on a limb and bought Take Off Your Pants by Libby Hawker. I bought it after several failed attempts at structuring the cloning story. (I wrote it from the wrong main character’s POV, then I wrote it without the right tropes, then I got lost in the plot and forgot about character development and consistent world building.) For me, buying a book rather than just borrowing it through KU feels like a huge risk. What if this book isn’t life changing? Don’t worry. Spoiler alert: It changed everything.

Libbie’s book was a game changer. I had this idea for who my main character was. Basically, she was a bit of a jerk. She was closed off because of a loss she suffered early in life, and took it out on everyone. But this book made me think more clearly about how my main character, Yami, had a deep flaw that got in the way of everything she did. The trauma she suffered made her closed off. She built walls around herself, keeping everyone at a distance except for the best friend she had before she experienced a big loss. The book walked me through creating an arc for Yami such that she could grow throughout the book, becoming more open to other people’s help and shattering the walls she built for herself. Game. Changer.

So that’s where Clone Crisis came from. A search for weird news, a love for my (immortal) dog (again, I have to repeat myself, she’s immortal and I don’t want to hear anyone saying otherwise), asking lots of questions about a world of clones, and structuring a book around that world. Sprinkle in a BAFMC, some tropes that I expect in my dystopian YA, and I have a trilogy that’s almost complete. But more on that “completing my trilogy” later.

2 thoughts on “Inspiration for Clone Crisis”